An architectural A to Z around the city 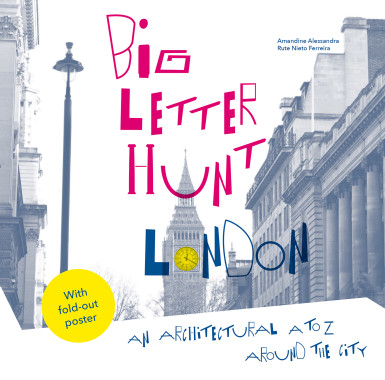 The Big Letter Hunt: London is an alphabet picture book that takes its readers – young and old – on a tour of England’s capital to find giant letters hidden amongst the buildings and city streets.

The architectural treasure hunt winds its way past London’s landmark buildings such as the Victoria & Albert Museum and the British Museum, as well as architectural gems such as the Barbican and the modernist Brunswick Centre. The letters also appear in the skyscrapers of the City of London, on tube stations and in the detailing of windows and facades. Printed in a colourful and bold graphic style and accompanied by quirky facts about the buildings and their design, this book is perfect for all architecture and design fans. There is a map to follow the hunt around the city, and the jacket folds out into a A–Z poster to hang on the wall.

Some letters are easy to spot; others need a closer look. The Big Letter Hunt: London is a book for both children and adults who like architecture, typography and London.

Rute is an architect and lecturer. She has worked on a number of projects across London, many of which are buildings for children. She is interested in getting young people to participate and engage with architecture, cities and play. Originally from Porto, Rute lives in east London.

Amandine is a graphic designer based in London. Her playful installation- and performance-based 3D typographic work has featured in numerous books. She likes to think of typography as a way to transform the message into a readable experience. Amandine is originally from Réunion Island and she now lives in east London.