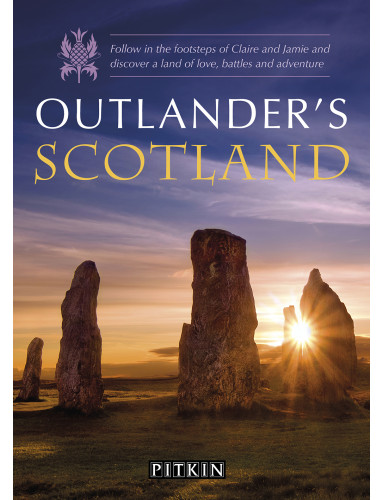 “Billow and breeze, islands and seas, Mountains of rain and sun………”

Since 18th-century Highland warrior Jamie Fraser and resourceful 20th century medic, Claire Randall first met on screen in 2014, millions of viewers have been swept away by the Outlander TV series to the wild hills and craggy castles of Scotland. Now you can follow in the footsteps of Claire and Jamie with this guide to the inspiring locations where Diana Gabaldon’s novels were set and the hit tv show were filmed.

From the ancient cobbled streets, gabled palace and herb garden of Culross, which became fictional Cranesmuir, to the iconic 1960s Pathfoot Building at the University of Stirling, which Claire’s daughter Brianna visits on her first trip to Scotland, you can time-travel through centuries. In Scotland, different eras coexist and collide – just as they do in Outlander.

Focusing on easy day trips from the characterful cities of Edinburgh and Glasgow – themselves jam-packed with Outlander locations – this guide will tell you about the most rewarding sights, when to visit them and how to get there.

Phoebe Taplin is an experienced author, who specialises in culture, heritage and travel. Phoebe has written several Pitkin heritage publications and now combines her passions for travel, walking and films in our new ‘Film Location’ series. Her books for Pitkin include Oxford Film Locations, Scotland Film Locations and Outlander’s Guide to Scotland.

"It’s beautifully presented, the text is light and informative, and the print quality of the book is top-notch."