The Greatest Knight That Ever Lived 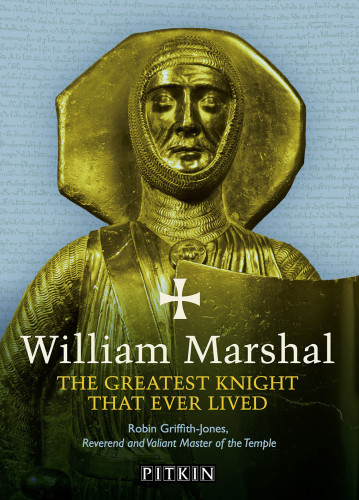 William Marshal, born about 1147, was the son of a minor lord who held the hereditary title of ‘Marshal’, or head of the king’s security. He became a knight loyal to five kings, the most powerful man in the kingdom, the hero of Magna Carta and a saviour of England. At his funeral in the Temple Church, London, on 20 May 1219, he was described by the Archbishop of Canterbury as ‘the greatest knight in the world’. William’s son commissioned a biography of his father, The History of William Marshal, which brings William vividly to life and is the fullest and most dramatic such biography to reach us from the Middle Ages.

The Rotunda of the Temple Church still contains eight 13th-century effigies of knights in armour. Three of the Marshals – William and two of his sons – are known to have been buried in the Church. By the late 16th century, antiquarians were trying to identify William’s effigy among them; and since 1843 one effigy in particular has been universally accepted to be William’s.

This has recently been disputed by a set of drawings, dating to c. 1610, discovered in Washington, DC. These drawings show all the medieval effigies in the Temple Church – and a further, long-lost gravestone which matches the earliest descriptions of William’s tomb. This raises a fascinating question: has the real monument to William been lost? This book will uncover the details of this latest discovery and commemorate the greatest knight that ever lived.

Robin Griffith-Jones is the Reverend and Valiant Master of the Temple at the Temple Church, and a Senior Lecturer in Theology at King’s College London. Robin has published widely on the New Testament, and on law and religion and architectural history. His books on the New Testament and early Christendom are The Four Witnesses (2000), The Gospel According to Paul (2004), The Da Vinci Code and the Secrets of the Temple (2006), and Mary Magdalene (2008). Robin Griffith-Jones is the descendant in office of Aymeric de St Maur, Master of the Temple in England at the time of Magna Carta and close friend of William Marshal. Aymeric and William were buried side by side before the rood-screen in the Rotunda of the Temple Church in May 1219.