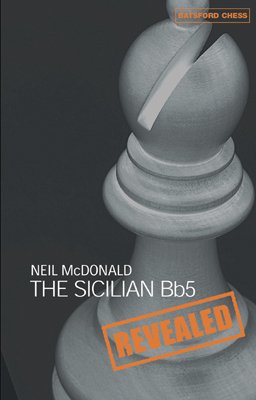 ‘The Sicilian BB5 Revealed’ follows the huge success of ‘The Benko Gambit Revealed’ and ‘The Queen’s Pawn Attack Revealed’ in a new and innovative series of books. Using fresh, clear presentation, the key ideas of the openings are explained in an entertaining and accessible way.

The aim of this series is to provide the essential knowledge to play the opening, while at the same time revealing the current thinking of the World’s elite players. For example, ‘First Moves’ leads readers through the basic opening moves. ‘Heroes & Zeroes’ gives the best and worst performances with the opening and features some of the leading exponents of the Benko Gambit. ‘Tricks & Traps’ reveals how you might catch out your opponent. ‘What’s Hot’ pinpoints the very latest ideas from the world’s elite. A detailed table in the style of ECO is given at the close of the book, summarising the main variations with assessments.

‘The Sicilian BB5’ is the most popular and successful Anti-Sicilian Variation. It first came to attention when it was used by Vassily Ivanchuk to score a stunning win against Gary Kasparov at Linares in 1991. It has since become recognised as the perfect way to avoid mainline Sicilian theory without compromising White’s attacking ideals.  As such it has proved a deadly weapon in the hands of Adams and Grischuk – and even Kasparov himself.

In this book you will find full coverage of both 2…d6 3.Bb5+ and 2…Nc6 3.Bb5. You will be shown how to implement in your own games the ideas and attacking systems that have worked so successfully at the highest level.

Neil McDonald is an International Grandmaster, prolific chess author and trainer. He is noted both for the lucidity of his writing as well as his extensive theoretical knowledge.