Batsford’s Birmingham Then and Now 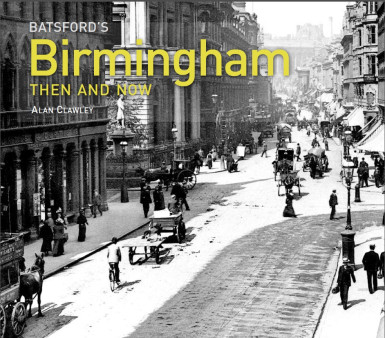 Birmingham Then and Now is the latest in the long-running series that uncovers archive photos of the landmark sites of a city and re-photographs them from exactly the same viewpoint today.

Using many images from the Batsford archive the book traces the history of the city using vintage photos from the Victorian and Edwardian era, through World War II and into the 1950s and 1960s with some gloriously nostalgic vintage colour comparisons.

Many of the grand buildings of the city centre are featured, such as the Town Hall and the Bingley Hall, but also the railway stations, shops, schools, markets, factories and football grounds that make up the fabric of the city.

Alan Clawley was trained as an architect. He has lived in Birmingham for several decades where his work has involved providing technical support to a wide variety of community projects. He is the founder and secretary of Friends of Central Library. His previous publications include a monograph on Birmingham architect John Madin.