In this interview we meet Justin Worsley, who is studying an MA in Children’s Book Illustration at the Cambridge School of Art. His picture book Aliens in the Park has won the Batsford Prize Children’s Illustration category this year, responding to the theme ‘Communication and Connection’. 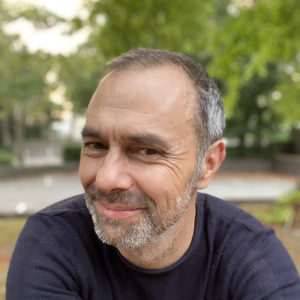 Aliens in the Park is a dummy picture book that talks about a young child’s imagination, the connection they have with their mother and their growing independence.

Hi Justin, what was your piece about? Can you tell us what initially influenced it and what it means to you?

The story is about the growing independence and vivid imagination of a young child out for a bike ride in the park with his mother, who is following along on foot.

I wanted to tell a story of the time in a young child’s life when they are starting to become more independent yet are still very strongly connected to their caregivers. I have had a love of cycling from the moment I first learned to ride a bike, to me cycling symbolises freedom and adventure, I also have always had a very strong bond with my mother and even in adulthood it has been constantly reassuring for me to know that she is there if I need her support. The aspect regarding the child’s imagination developed as I started to work on the story, I remember having a ‘eureka’ moment on a train journey from college to home when I was sketching cyclists in the park from my imagination and thought they might look a bit like aliens to a young child, with their funny helmets and skin tight clothing! The title of the book Aliens in the Park came from that moment. I have been lucky enough to live and work in various cities around the world, the park setting for the book is heavily influenced by Central Park in New York where I lived for 10 years but it could also be in any large city.

What mediums or materials did you decide to use, and why?

I like to work in free flowing materials as I feel they give a certain life and energy to my artwork, for this project I chose a limited colour palette of acrylic inks to paint my illustrations in. The limited colour palette of warm yellows and orange with dark blue helped to set the scene as autumn and I also feel it makes the artwork easier to read. I highlighted the boy using bright red for his helmet to draw the reader’s attention to his location on each page.

What made you want to study children’s book illustration?

I have always drawn and had a love of children’s book illustration from an early age. After secondary school I studied a BA Hons in Industrial Design at Northumbria University and went on to become a toy designer. It’s been a job that I have loved but now after over 25 years I am ready for a new adventure and becoming self employed has given me the freedom to study part time for the MA at Anglia Ruskin University and pursue a change in career.

What are your biggest artistic inspirations? Are there other artists who you admire or who inspire you?

I get inspiration from many places, from observing people going about their lives, from childhood memories, film, art and animation. Lately I find cycling is also a great source of inspiration, it’s a time when my mind wanders and often I’m struck with an idea and will pull over to the side of the road to make a note in my phone. I admire the work of so many children’s book illustrators, among my current favourites are Sydney Smith, Isabelle Arsenault, Beatrice Alemagna, Taro Gomi, Satoshi Kitamura and Christian Robinson.

How would you describe your style? Would you say that it has changed over time?

I would say my style is constantly evolving and changing especially at this early stage in my journey. Through my artistic experimentation on the MA course I have discovered that I love to paint, so I guess you could call my style ‘painterly’. Rather than draw an outline and fill it with colour I like to paint freely, often I will make a few versions before I am happy. I also strive for simplicity and am happiest when my illustrations communicate my intention with the minimum amount of fuss and detail.

What does winning the Batsford Prize Children’s Illustration Award mean to you?

To have this recognition from a group of professionals in the world of publishing has given a big boost to my confidence. I believe that it will also be great help in my pursuit of ultimately getting the picture book published.

After you have completed your studies, what do you see yourself doing next?

My goal is to immediately start to transition from being solely a toy designer to also being an author/illustrator of children’s books. I also want to develop my new found love of painting further.

About the Batsford Prize

The Batsford Prize is an annual award open for undergraduate and postgraduate students in the fields of applied art and textiles, fine art and illustration. View the winners and runners up of this year’s award here. The theme for the Batsford Prize 2023 will be revealed shortly…