On the 12th of May, National Limerick Day, Mick Twister will make you howl with laughter at the achievements and mishaps of history.

Travelling chronologically through the milestones of time, this compilation of 100 lively and humorous limericks takes us back to the ancient civilisations and beyond, to fill your afternoon with an abundance of grins and giggles.

There once was an ancient Egyptian

Whose beauty defied all description. 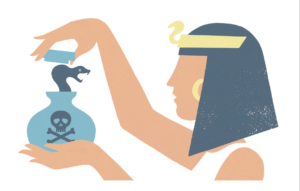 She was driven to take

Her life with a snake

Not having strong drugs on prescription.

So was Cleopatra as good-looking as she’s cracked up to be? Mick reckons so – “she certainly had pulling power, but then she was probably the richest woman in the Mediterranean. Plus, all those baths in asses’ milk must have given her a complexion to die for!”

Fast forward to the Renaissance… a mighty movement of art, architecture, philosophy and literature that flooded across Europe in the 15th and 16th centuries. Amongst these genius thinkers and flourishing artists was Leonardo da Vinci, a painter from Florence.

Did much more than most people can –

Faults? There were not any

(Ignore that old novel by Dan).

“In between painting the ‘Mona Lisa’ and ‘The Last Supper’, Leonardo played a mean lyre, and studied botany and human anatomy – as well as inventing the helicopter.”

Come the revolution era in Western Europe and the voices of women are starting to be heard. Mary Wollstonecraft Godwin wrote the Vindication of the Rights of Women, laying out the principles of gender equality paving the way for women’s suffrage:

There was a young woman named Mary

Whose lifestyle was seen as contrary.

Her time has now come

But many men then found her scary.

An artist, a writer and reader,

But drunk, he was quite a rude bleeder.

Churchill was best known for his cigars, his speeches – and his drinking. In later life, he drank a bottle of champagne with lunch and another with his evening meal. Perhaps there is merit in his thinking after all…

Mick Twister is a London-based journalist and cryptic crossword compiler for the Times. Since inventing the @twitmerick in May 2011 he has been tweeting the news in daily limericks. Twitmericks have been reproduced by the Washington Post and the New Statesman and will make you smile at any time of the day. 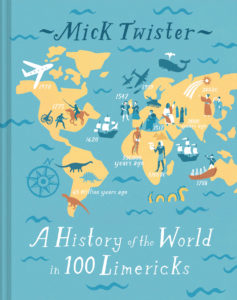 His book A History of the World in 100 Limericks is the funniest way to learn about the past, as he cleverly raids the tomes of history and picks at the bones of the world’s greatest political figures, moments and events.